A Chat With The Moody Blues’ John Lodge 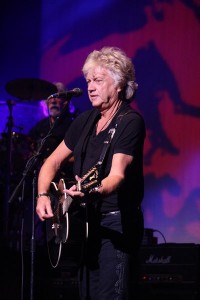 The human race is nothing if not peculiar. There’s no other way to explain the mystifying need to demystify the meaning of life down to the smallest detail. It’s nothing for puzzled peeps to spend countless “day’s useless energy” debating something that no one really knows anything about, namely “heaven,” “paradise,” “the celestial kingdom” – heck, we can’t even decide what to call it.But while there is infinite cosmic uncertainty as to whether or not manna is really freshly baked bread, New York style cheesecake – or maybe even Moon Pies – there is at least universal accord as to what the heavenly soundtrack must sound like. And as it turns out, it sounds an awful lot like The Moody Blues’ greatest hits.Over their extraordinary career, the band known for music that expresses universal themes of love, compassion and peace has sold an extraordinary 70 million albums worldwide and has been awarded an astonishing 14 platinum and gold discs, making them one of the top-grossing album and touring bands in existence.

Uniting the prodigious musical gifts of guitarist/vocalist Justin Hayward, bassist/vocalist John Lodge and drummer Graeme Edge, the group exploded onto the rock scene with the release of their colossal 1967 album “Days Of Future Passed.”

Since then The Moodies have produced music that bridges the gap between classical and pop-rock genres, including a top-selling string of concept albums, “In Search Of The Lost Chord,” “On The Threshold Of A Dream,” “To Our Children’s Children’s Children,” “A Question Of Balance,” “Every Good Boy Deserves Favour” and “Seventh Sojourn.”

Christened “the Sistine Chapel of popular music” by Rolling Stone, The Moodies continue to influence contemporary song with a staggering roster of hits, including “Nights In White Satin,” “Tuesday Afternoon,” “Ride My See Saw,” “The Story In Your Eyes,” “Isn’t Life Strange,” “Question,” “I’m Just A Singer (In A Rock And Roll Band),” “Your Wildest Dreams,” and “I Know You’re Out There Somewhere,” to name a few.

This year marks the 45th anniversary of their monumental “Days of Future Passed,” featuring the timeless smash “Nights in White Satin.” “Nights” was one of the first four-minute songs played on the radio, becoming one of the biggest selling singles in history, and hitting #1 three separate times on Billboard.

To commemorate the album’s initial release, the band has been touring the U.S. on their “Highway 45 The Voyage Continues Tour.” In between tour dates, longtime Moody Lodge was kind enough to chat with me about the band’s remarkable run, the tour and “Nights In White Satin,” confessing with a laugh that the ageless hit “never ceased to amaze me from day one, to be honest. It’s just an amazing ride.”

The song’s eternal popularity, as well as the universal appeal of every one of The Moodies’ seemingly endless list of hits, is perfectly understandable. Lodge and his talented band mates have the exceptional ability as songwriters to balance meaning and melody.

“I think you do want your songs to have meaning,” Lodge agreed. “But sometimes you write a song that has a representation of who you are as well, like ‘I’m Just a Singer (In a Rock and Roll Band).’ That’s who I am, you know, full stop. And that’s the meaning of that song. Within a song like that, you can put other things in there that hopefully are thought provoking for people and have meaning.”

“So you’re right, there is a balance, because you don’t want to become a preacher. You certainly don’t want to do that. I don’t want to force my views on anyone else whatsoever. But what I like to do is put lyrics in a song that mean something to me, that has some connection with me as a person. Then there’s a connection with the listener. Or the person perhaps doesn’t even listen to the music but just reads the lyrics.”

While the gifted musicians have been reluctant to “preach to their musical flock” throughout their storied career, that has never stopped the devoted fans from enthusiastically embracing The Moody Blues’ message of hope and harmony.

“People say to me, ‘What is the success of the Moody Blues?’ There could be a million reasons, a million things, I suppose, coming from different angles. But I think it’s what you just said there. It’s that the fans associate with who we are and they do embrace The Moody Blues’ music. And it’s other things as well.”

“They know with The Moody Blues, we’re gonna be truthful and we’re gonna deliver what we really believe to be the truth in a meaningful sort of way. I remember when all the troubles were going on after 9/11 and all of those things that were done after that. Everybody was scared stiff around the world. And I remember somebody e-mailed me and said it was really nice to put on Moody Blues music and escape from the bombardment of bad news.”

The best songwriters – and The Moodies have three of them – have an innate knack for creating an immediate evocative connection with anyone within earshot. At its magnificent best, Moody music exposes the willing listener to the affecting inner self of the three melodic bards. Lodge described songwriting vulnerability as essential to establishing the connection.

“We used to sit around a small wood table. In actual fact, it’s part of The Moody Blues’ history and they’ve stored it away lovingly. And this table’s sat in between all of us for probably 30 years. We sit around it and write songs and sit around and play each other the songs. Graeme would tap on top of the table with the drum beat or something. That’s the way it works.”

It boggles the mind to think that any of The Moody Blues’ magnificently symphonic creations would have had their genesis around a small wooden table. But when asked if layering additional musicality on a song caused it to lose some of its “soul,” Lodge replied with the perfect solution.

“A lot of the songs were written just on bass. I actually talk the song through, playing bass and there’s no rhythm, nothing except the rhythm from the bass play. But that was the bass of the first track that goes down. So by keeping to the instrument that the song was written on, you normally do keep the character of the song.”

“It’s like ‘Nights in White Satin.’ It’s just acoustic guitar and a bass, drums, flute and the vocals, no overlays. If the song works with the instrument it’s written on, then it will work on its own without anything else. So you’ve gotta be really careful, as you say, about painting the picture that goes on top.”

Lodge and his fellow artists have painted immeasurable masterpieces over the last five decades. The Moodies’ bassist was grateful for the limitless creative outlet that his music provided for him.