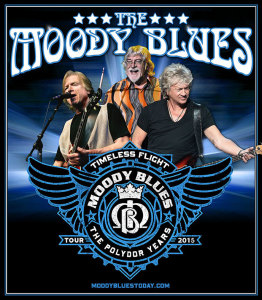 Timeless Flight – The Polydor Years” Moody Blues tour will launch next March 19-May 10, 2015, beginning on the East Coast in Massachusetts and concluding on the West Coast in Colorado, also hitting Westbury, NY, Columbus, OH, Seattle, WA, Portland, OR, Las Vegas, NV, Los Angeles, CA and Scottsdale, AZ, to name a few stops.  The band will be touring in relation to their new box set, The Polydor Years 1986-1992, which was released November 24, on UMe.

The eight disc THE POLYDOR YEARS 1986-1992 set includes six CDs and  two DVDs which brings together, for the first time, remastered editions of all The Moody Blues’ Polydor era albums, spanning the period 1986-1992.  The package – The Polydor Years 1986-1992 – includes 17 bonus tracks, 11 of which are being released for the first time, including a 1991 BBC radio session.  The set also includes a previously unreleased concert recording from the group’s July 1986 appearance in Cleveland, Ohio, during their “Other Side of Life” tour, and a fully remastered edition of the September 1992 “Red Rocks” concert with the Colorado Symphony Orchestra.

The DVD features the newly remastered and previously long-time unavailable release of the “Night at Red Rocks” concert, plus the rare, fan club-only documentary “The Other Side of Red Rocks”.  Housed in a slipcase with an accompanying 64-page hardbound book, the entire set is topped off with the inclusion of a 7” blue vinyl single of “Al Fin Voy A Encontrate”, the rare Spanish version of “I Know You’re Out There Somewhere”.

The Moody Blues have been at the forefront of the classic rock music scene for more than 40 years, with their multi-Platinum, Platinum and Gold albums and singles hitting Billboard at #1, Top 5, Top 10, Top 20 and Top 40.  Their illustrious roster of hits include:  “Nights In White Satin,” “Tuesday Afternoon,” “Ride My See Saw,” “The Story In Your Eyes,” “Isn’t Life Strange,” “Question,” “I’m Just A Singer (In A Rock And Roll Band)” and “Your Wildest Dreams,” and many more.

“Timeless Flight – The Polydor Years” Tour Dates Are As Follows:

Check the Tour Page for Presale Tickets and VIP Packages.