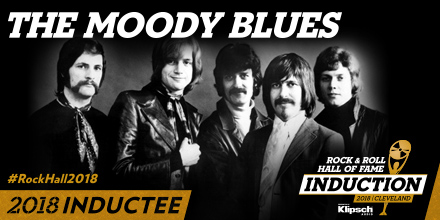 33RD ANNUAL ROCK & ROLL HALL OF FAME INDUCTION CEREMONY TO BE HELD ON APRIL 14, 2018 AT PUBLIC AUDITORIUM IN CLEVELAND, OHIO

Says Justin Hayward:  “I’m extremely grateful to the Rock & Roll Hall of Fame, first for creating the supreme temple to all that has brought endless joy into my life since I was a small boy, and now, after all these years, for including us.  It’s a privilege to be celebrated in the same building, on the same street even, as my own heroes – Buddy Holly and the Everly Brothers – and now, at last, with us, my heroine Nina Simone.  But all the thanks must go to The Moody Blues fans for giving us a wonderful, wonderful life in music – our induction has now validated the music they so love, and I’m so, so pleased, for us all. Yippee!”

Says John Lodge:  “The fans are the heart of the Moody Blues — their faith, support and love have moved mountains. Their voices have been heard, and I am proud to say, “we have been inducted into the Rock & Roll Hall of Fame.”  Thank you to American Radio for keeping the faith in the Moody Blues, and to the Rock n Roll Hall of Fame for our induction.”

Says Graeme Edge:  “I want to thank all of my peers who bestowed the honor of voting us in.  Most of all, I’d like to thank all of our fans who have supported us over the years, and have steadfastly stood by us.  I would also like to thank the Rock & Roll Hall of Fame foundation for putting a cap on my career;  one that continues to astonish me with its gifts.

A limited number of pre-sale tickets are available for Rock & Roll Hall of Fame members in advance of the public sale date. To be eligible for the member pre-sale opportunity, you must be an active Rock & Roll Hall of Fame member by December 31, 2017. Supporters of the Donor Circle by December 31, 2017 can access VIP packages and premium balcony tickets immediately. Additional public ticket details and pre-sale offers will be announced in January.

Fans can pre-order exclusive 2018 Inductee t-shirts now at rockhall.com/store and receive 18% off their order. The Rock Hall store is also offering fans 10% off regular items and free shipping for a limited time.

The Moody Blues recently announced upcoming 2018 dates of their special live tour celebrating the 50th Anniversary of their iconic, 1967 landmark album, DAYS OF FUTURE PASSED.  The tour begins on January 10 in Hollywood, Florida, continuing through January 31 in Las Vegas, Nevada, where the band will complete a run of four shows at the Wynn Las Vegas.  Titled DAYS OF FUTURE PASSED – 50TH ANNIVERSARY TOUR, the tour kicked off earlier this year, and features the band performing their greatest hits in the first half, and DAYS OF FUTURE PASSED performed in the second half.

The Moody Blues have been creating music that bridges the gap between rock, classical and pop-rock genres for the last five decades.  Their sound has held its ground in a genre of music that is ever-changing, and has sold in excess of 70 million albums worldwide.  The band has been awarded 14 platinum and gold discs, and their roster of hits include:  “Nights In White Satin,” “Tuesday Afternoon,” “Ride My See Saw,” “The Story In Your Eyes,” “Isn’t Life Strange,” “Question,” “I’m Just A Singer (In A Rock And Roll Band),” “Your Wildest Dreams,” and “I Know You’re Out There Somewhere,” to name a few.

The Moody Blues’ No. 1, Top 5, Top 10, Top 20, Top 40, Multi-Platinum, Platinum and Gold albums and singles, have generated sold-out tours on a consistent basis over the course of several decades, making them one of the top-grossing album and touring bands of all time.