The Moody Blues Look to Their ‘Passed’ 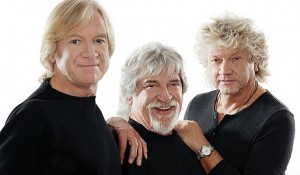 When you’re a part of a band that’s been around for nearly five decades, it seems likely that important anniversaries would keep popping up — even when you’re not looking for one.

So was the case when The Moody Blues were going over some new promotional designs, one of which featured a version of the 45-rpm single of one of the group’s major hits, “Nights in White Satin.” It was then that someone realized the number 45 signified something beyond simply the record’s revolutions per minute — this is the 45th anniversary of the album “Days of Future Passed,” which featured the hit song.

“It originally started where we were just going to have a logo of the 45 (record) of `Nights in White Satin’ when somebody in the band linked that to 45 years,” singer-guitarist Justin Hayward said during a recent phone interview from his hotel room in Stamford. “It just evolved into, `Why don’t we just do “Days of Future Passed” and focus on that album.’ It gives us something to talk about and to focus on for the tour.”

“Days of Future Passed” came about because of what Hayward called “a series of wonderful accidents.” It started as a way for Decca Records to get back money it had advanced to the band and to promote its then-new stereo systems. Stereo was already a success for classical music, and the label wanted to show it could also be used for rock ‘n’ roll.

“They wanted us, as a way to pay off that debt, to do a demonstration record of a rock version of Dvorak with (conductor) Peter Knight playing the real Dvorak between our pieces and an engineer mixing them together so people would say, `Oh, that sounds wonderful in stereo,’ ” Hayward said. “Michael Barclay, whose project it was to get these demonstration records together, suggested we do it the other way around — we do our songs and then Peter Knight would orchestrate pieces in between our songs, and so that’s what we did.

“It was presented to the record company, and though it was not what they wanted, `Nights in White Satin’ started to take off in Europe. Then we came to America, where FM radio was just starting and it was just perfect for FM radio because it was proper stereo for the first time.

“I say it was a series of lucky accidents, but in truth, I thought we were making a nice little arty album that might get played at cocktail parties or something like that. I never realized it would have a wider appeal.”

Thanks to “Nights in White Satin” and another single, “Tuesday Afternoon,” the resulting record gave The Moody Blues a new direction from when they started as a straightforward British pop band that had a major hit with “Go Now” in 1964.