“This induction is validating the music our fans really, really love,” singer says. “I’m so pleased for all of them.” 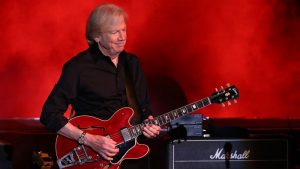 Up until the moment he learned the Moody Blues were entering the Rock & Roll Hall of Fame, frontman Justin Hayward spent almost no time thinking about the institution. “On Friday, I couldn’t have cared less,” he says. “On Saturday, when I found out we were in, I was thinking, ‘Wow, this is amazing!’ But I’m still a committed European. I sometimes wish I was an American and could get really excited about it.” But he’s still excited enough to plan a trip to Cleveland in April for the ceremony, which could include a reunion with his former bandmates Ray Thomas and Mike Pinder. We spoke with Hayward about the honor, his thoughts on his fellow inductees and their hysterical guest spot on The Simpsons in 1999.

Congratulations! How do you feel?
I want to start off by saying this is the first time that Rolling Stone is calling me in 51 years. [Laughs] That was the first thing I thought. I’m sitting here with my engineer and I said, “Rolling Stone is going to call me?”

Better late than never. How did you find out the big news?
I found out from our agent at CAA.

What does it mean to you on a personal level?
Hey listen, I’m extremely grateful to the Rock & Roll Hall of Fame for two things: For creating the supreme temple to something that has brought me endless joy since I was a little boy. The second thing is that after all these years they are including us. That’s about it. That’s how I feel about it.