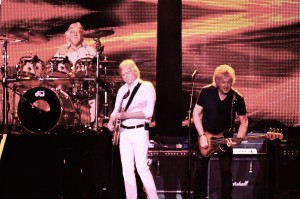 The Moody Blues returned to the Seneca Niagara Events Center Saturday evening for their Timeless Flight 2014 tour. The show marked the band’s first appearance since 2012 at the venue as well as it being the second night of their current summer tour. Bassist John Lodge announced how the band was going to take the crowd back on a journey to the sixties. He pointed to a group and said see you survived much to the laughter of the crowd who got the joke. Well the band did take the crowd back in time with several of their standard songs many of which are considered classics.

Lodge along with singer, guitarist Justin Hayward and drummer Graeme Edge comprise of what is left of the band’s “classic” lineup with Edge being the lone founding member. The show started off similar to that of their 2012 show until “Say It With Love” a track culled from the 1991 Keys Of The Kingdom release was played.

It wasn’t until the band started “I Know You’re Out There Somewhere” that the crowd seemed to come alive and afterward it resulted with the first standing ovation of the night. “Isn’t Life Strange” a song sung by Lodge also received a lengthy ovation. The stellar “Tuesday Afternoon” followed.

Edge talked briefly as he told a few jokes and said it really still is about sex drugs and rock n roll which drew a huge response from the crowd. He also mentioned how the band recently celebrated their fifty year anniversary which dates back to the humble beginnings of 1964, before he launched into one of the songs he was responsible for “Higher and Higher”.

“Driftwood” was offered as a change of pace before the band brought it all home by finishing with gems “I’m Just A Singer”, “Nights In White Satin” and “Question”.

If you never had the pleasure of seeing The Moody Blues live, I strongly urge you to not miss them if they play anywhere near you within reasonable driving distance. It would be something you’d regret the rest of your life.

Not one to beat a dead horse I still am perplexed how this band with all their accolades and accomplishments is still being ignored by the Rock and Roll Hall of Fame. There are several questionable acts already enshrined that leave you shaking your head as to how they managed to get in over a band such as The Moody Blues.

As the band’s career winds down their live performance is still something to be marveled at. They still sound amazing in concert and they have that special connection with their audience. Averaging fifty plus shows a year with the majority of those shows being capacity crowds it is no wonder why this band is still in demand for promoters. The music is timeless and has struck a chord with many fans who are happy to see the band still performing at a level that most bands can only dream about.