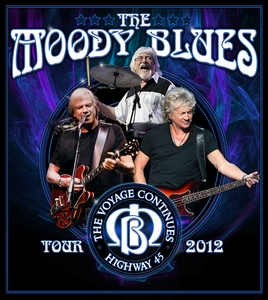 I’m just beginning to see, now I’m on my way
It doesn’t matter to me, chasing the clouds away

The Moody Blues sang exactly two songs at Proctors before the crowd took to its feet and danced in the aisles to the music of one of the world’s most iconic rock bands. There’s a reason for this, none of which is easy to explain: Depending on your age, the Moody Blues take you to a happier place, if only as a memory. This band, after 45 years—yes, 45—rocks.

But they do it with a class and style, a depth and meaning, few rock bands have ever been able to capture, and one we wish our kids could have grown up to. This is rock with meaning,  and it grabs both our heart and soul to a way of life we all remember: Long before lyrics became filthy, cell phones and texting became annoying, and while the wounds of a nasty war were still alive and well in our collective soul. These are words and lyrics that have a gospel side to them, that make you realize wondering about who you are and where you’re going are not your thoughts alone.

The Moody Blues are not youngsters any more, but then, neither are we. We grew up together, we got old together, and that’s ok.

I admit, I hate going to concerts to hear aging rocksters. There are some things better left a memory, and hearing your favorite songs come from crackling tight vocal cords is never endearing. But this was not the case with The Moody Blues. They sang, sang, and sang some more, on key, never missing a note, endearing their followers every step of the way.

The stage, like the message it delivered, was simple: Nothing fancy, no major new-age gizmos. But if you grew up with the Moody Blues, this is part of the ultimate concert package:  The message was what was important.  Who hasn’t listened to “Tuesday” on the radio while driving on the highway, and not wanted to skip your exit just to see where the road took you?

The crowd came out in throngs at Proctors to answer that very question, and to revisit a time we all remember as better, in a kinda-had-to-be-there sort of way.

They hit all the old favorites, and some new ones, too, which included some great new musicians including an extremely talented and multifaceted Norda Mullen. She sang, played flute, guitar and never missed a beat.

The Moody Blues proved once again why they are a favorite band. They came to see us, and we came to see them, and we all knew what we’d say to each other.

One of those words would simply be two fingers in the air, meaning to us, “Peace.”

« John Lodge with Jim Gagliardi on 103.1 FM
The Moody Blues Look to Their ‘Passed’ »