The Moody Blues takes SPAC off on a Timeless Flight

Where better to watch a half century’s worth of one band’s music than Saratoga Springs, where history ranks with horses and health? Formed in the mid 1960s, the Moody Blues are sometimes classified in the ‘psychedelic rock’ genre, holding space in the same category as Pink Floyd. But many of the elements one would expect at a psychedelic rock show were not present at SPAC on August 4. Most of the fans were over 60 — the musicians themselves are hovering around 70 — and there was a distinct absence of the substances that occupy the air and space during rock shows attended by younger crowds.

What was present though was a very sincere love, appreciation, and enthusiasm for the music. Performers and fans alike were very much ‘into it.’ The band members played like they were in their 30s, with expressions of ecstasy held during intense guitar riffs and the occasional wink at the ladies in the front row. Fans were singing along, trying hard to capture the magic on their handheld cameras, and even dancing in the aisles — which was definitely a pleasure to see. After all, those of us in the X and younger generations learned how to celebrate music from the very people who were at the Moody Blues show.

The subject of aging was merrily acknowledged. John Lodge (bassist) congratulated his fans, saying “All you old hippies, you made it after all!” Graeme Edge (drummer) stepped down from his elevated set on the stage to address the crowd at the front mic, and quipped, “Back then I had brown hair, white teeth, and this [forming a V with his index and middle fingers] meant ‘peace.’ Now, I have white hair, brown teeth, and this [the V] means Viagra.” 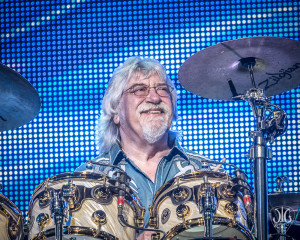 But of all the ways in which the aging process was celebrated by the Moody Blues and their fans, the most significant was the music. The evolution of the band’s 50 year history was traced with songs like “Tuesday Afternoon,” “Nights in White Satin,” and “In Your Wildest Dreams.” One of the fans shared that the music of the Moody Blues is ‘poetry set to music.’ And it is. It’s also worth noting that the band (Lodge, Edge and vocalist/guitarist Justin Hayward) share the stage with some pretty talented people: Norda Mullen (flute & vocals), Gordon Marshall (drums), Julie Ragins (sax, keyboard, and vocals), and Alan Hewitt (keyboard & vocals).

The Moody Blues, promoting their 2013 compilation album, Timeless Flight, are on tour through this summer.