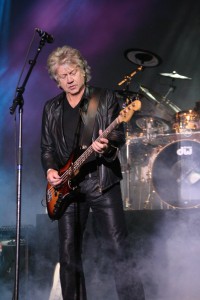 The Moody Blues have been musical mainstays on concert stages, recordings and the airwaves for over thirty years.  Their remarkable consistency has generated the sale of over 55 million albums and created a standard for classic rock music which has brought them numerous awards throughout the world.

John Lodge is bass player, singer and songwriter for this classic English band.

John was born on July 20, 1945 in Birmingham and attended Birches Green Junior School, Central Grammar School and the Birmingham College of Advanced Technology, where he was an Engineering student.

John was first introduced to rock ‘n’ roll via American artists such as Jerry Lee Lewis, Little Richard, Chuck Berry, and American movies (“The Girl Can’t Help It”).  And then Buddy Holly, not only a songwriter but an artist whose music made John realize that there was harmony in music, too.  John then made up his mind which road to follow.

At school, he was moved from the music class to the woodwork class for not knowing the birth date of Beethoven, but at the age of 15 met up with Ray Thomas and later Mike Pinder and formed El Riot and the Rebels, which became one of the most popular bands in Birmingham.  However, Ray and Mike wanted to move to London but John decided to stay at college and complete his education.  Not wishing to give up music completely, he formed The Carpetbaggers (who for a time were going to be Gene Vincent’s backing group) and started to write his own songs.

After obtaining a Degree in Engineering, he again met up with Ray Thomas from El Riot and the Rebels, who, by that time, had formed the M & B 5 with Mike Pinder and Graeme Edge, which had evolved into The Moody Blues, who had already enjoyed a hit single with “Go Now.”  Personnel changes were afoot and following his reunion with Ray, John was asked to join the Moodies in 1966, at the same time as Justin Hayward.

John’s prolific songwriting for The Moody Blues has produces such hits as “Ride My See-Saw,” “Isn’t Life Strange,” “I’m Just A Singer/In A Rock And Roll Band (which won John an ASCAP songwriting award), “Steppin’ In A Slide Zone,” “Talking Out Of Turn,” “Sitting At the Wheel,” “Lean On Me (Tonight)” and “Gemini Dream” (with Justin), which won them both a joint ASCAP songwriting award.

John has received two Ivor Novello Awards for contributions to British music.  He is also a member of the Performing Rights Society of Great Britain, and the American Songwriters’ Guild.

2001 has seen the worldwide release of the IMAX movie, Journey into Amazing Caves, which is a new venture for John and the Moody Blues.  John, along with Justin, has written two new songs for the movie, the title track “We Can Fly,” and “Water.”

After the Moodies took a break from touring and recording, John joined Justin in making the beautiful album Blue Jays in 1975 and they toured extensively in England.  Following that, John and his family spent time sight-seeing in Europe and America, taking time to enjoy all the sights that had passed him by so quickly during the Moodies’ tours.  Refreshed, John then worked on his first solo album Natural Avenue, which was released in 1977 together with three singles “Say You Love Me/Natural Avenue,” “Children of Rock and Roll/Piece of My Heart,” and “Summer Breeze/Rainbow.”  In 1980 two non-album tracks were released – “Street Cafe/Threw It All Away.”  In 1996 Natural Avenue was re-packaged and re-released in the UK on Pinnacle Records and then the rest of the world via The Moody Blues Fan Club and John’s website, johnlodge.com.

Since getting back together in 1978 for the album Octave, John has once more been a driving force behind The Moody Blues and his happy, engaging personality, and obvious enjoyment for performing on-stage, shows itself to his many fans.  As a musician, he has always placed an emphasis in playing live and believes that the group’s stage performances have been the key factor in keeping the group’s unity and sense of purpose.  He believes that the success of the band has been their willingness to travel the lesser-trodden paths in music, to stay true to their own feelings of direction, and to perform only their own material.

Fans will be pleased to learn that John believes music is not something you retire from – it’s a 24-hour a day existence.

Like fellow Moody Justin, John enjoys the fun and challenge of working with other musicians and, whenever the band’s busy schedule allows, giving his time to charitable events.  Thus, some noteworthy appearances include:

When away from the spotlight John enjoys a wide range of hobbies including of course music… classic cars, wine (he is a “Chevalier de Tastevin” of Burgundy), tennis, theatre, cinema and especially golf which he plays often and frequently participates in tournaments in aid of various charities.  He is honored to be a member of the Variety Club of Great Britain Golf Society which raises funds for disadvantaged children’s Sunshine Coach Appeal.

In collaboration with PGA professional, Walter Keller, John has released an audio cassette called “Rhythm of the Swing,” attempting to help fellow golfers improve their game to the sound of soothing music in the right tempo.

Solo Compositions (including Blue Jays):
“Remember Me, My Friend” (with Justin)
“You”
“Saved By The Music”
“Maybe”
“When You Wake Up” (with Justin)
“Natural Avenue”
“Summer Breeze”
“Carry me”
“Who Could Change”
“Broken Dreams, Hard Road”
“Piece Of My Heart”
“Rainbow”
“Say You Love Me”
“Children of Rock and Roll”
“Street Cafe”
“Threw It All Away”

Solo Singles:
1975 I Dreamed Last Night/Remember Me My Friend (with Justin)
1975 Blue Guitar/When You Wake Up (with Justin)
1977 Say You Love Me/Natural Avenue
1977 Children of Rock and Roll/Piece Of My Heart
1977 Summer Breeze/Rainbow
1980 Street Cafe/Threw It All Away