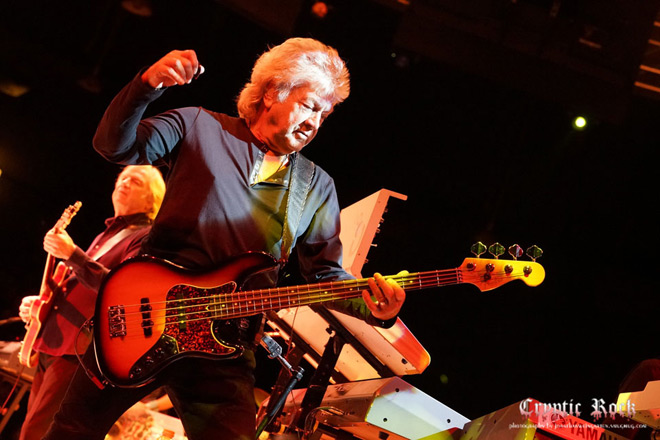 During the 1960s, Rock-n-Roll came into its own as a leading force in the Pop music world. A time when many UK bands rose to international fame, one which stood on their own were The Moody Blues. Initially debuting in 1965, with the more R&B influenced The Magnificent Moodies album, introducing new members to the band shortly thereafter, the direction and course of history for The Moody Blues would change forever.

Progressive and unique, they would go on to sell over 70 million albums worldwide, attain 18 platinum or gold-selling albums, and finally earned a rightful place in the Rock and Roll Hall of Fame in 2018. A long overdue induction, The Moody Blues remain immersed in touring and bringing 50 years of their music to sold out crowds around the globe.

With no lack of inspiration, amidst it all, key member John Lodge has kept busy, releasing his new solo album, 10,000 Light Years Ago, in 2015, and more recently, Live from Birmingham: The 10,000 Light Years Tour in late 2017. A piece of music he is proud of, on the heels of The Moody Blues shows, Lodge is set to continue solo touring, and with it he brings a treasure chest of surprises to audiences. Energized and ready to rock, Lodge recently took the time to chat about the years gone by with The Moody Blues, the work behind his most recent music, what to expect from his solo performances, the potential of new Moody Blues music, plus more.

CrypticRock.com – You have been involved in music essentially your entire life. With that in mind, The Moody Blues have been established for over five decades, sold multi-millions of albums, toured all over, and are no question one of the most influential Rock bands in history. Briefly tell us, what has this Rock-n-Roll journey been like?

John Lodge – Amazing! When I was 12-13 years of age I got my first guitar, I paid about 10 dollars for it. I learned to play the guitar, and there was no one in England at the time who could show me what Rock-n-Roll was about; I just tried to find out how it worked. At the time, I watched so many American television shows/movies and tried to watch how people were playing guitars. That is how it started. The journey has gone from there all the way through to double concerts at Madison Square Garden. It’s just been an amazing journey! It’s all down to the music. I love Rock-n-Roll, I loved it from the very minute I heard it for the first time. That’s who I am, really.